National Testing Agency creation has been approved by Union Cabinet under the chairmanship of PMO India. NTA will be registered as an autonomous testing organization. It will conduct entrance exams for higher educational institutions. In the longer run, it will conduct all exams currently held by CBSE as well as AICTE. However, to start with it will conduct exams organized by CBSE only.

The most interesting thing about setting up of NTA is that it will hold all exams online, and in addition, they will take place at least two times in a year. This will provide adequate opportunities to candidates by lowering burden of having to perform in a day. 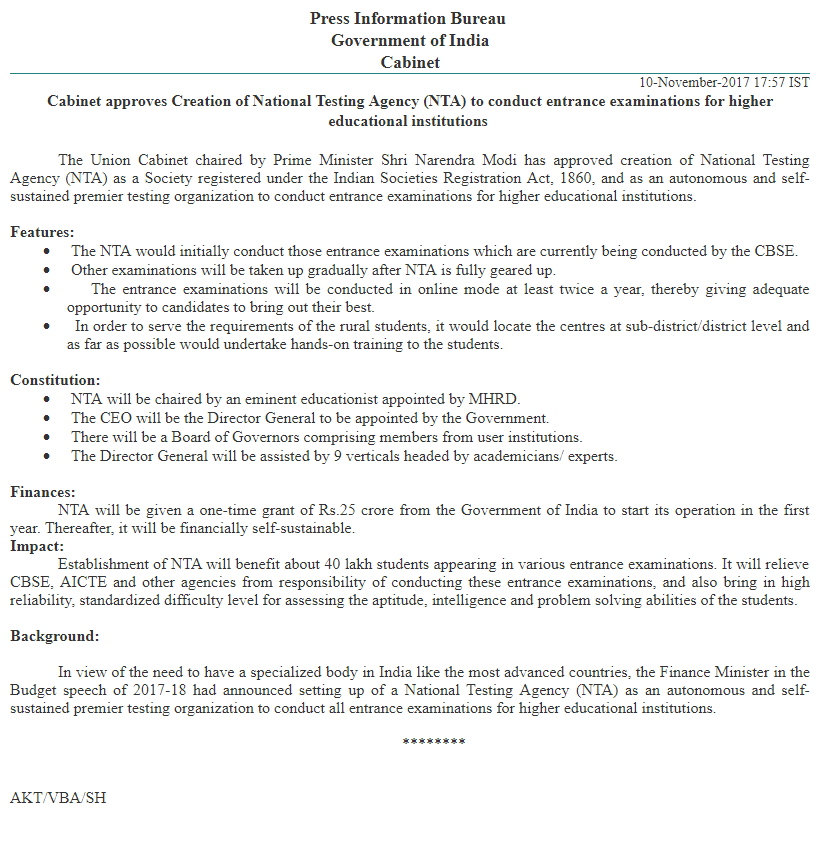 NTA will be registered as a Society registered under the Indian Societies Registration Act 1860. MHRD will appoint an eminent educationist as its Chairman. The government will appoint Director-General as its CEO. Members of user institutions will be a part of Board of Governors. A total of 9 verticals headed by academicians will assist Director-General.

A one time grant of Rs 25 crore is being given by GOI to start operations of National Testing Agency in its foundation year. After that, it is expected to be financially self-sustainable.

It is estimated that creation of NTA will impact by benefitting around 40 lakh students who appear in exams held for higher education now. On one hand, it aims to relieve Central Board of Secondary Education (CBSE) and All India Council for Technical Education (AICTE). On another hand, it aims to bring reliability, standardized difficulty of exams. It will create a common testing ground to assess aptitude, intelligence, problem-solving skills of students.

Plan for setting up a specialized body in India, solely for the purpose of holding exams, was proposed by the Finance Minister in Budget 2017-18.

This opens up several questions. Such as, from when is this going to be implemented? Will exam pattern of JEE Main, NEET, CTET, NET and such exams change upon introduction of NTA? When will exams of AICTE also come under NTA? It seems like in very near future these questions are going to get answered. Watch this space for more.

Aadhaar compulsory for UP Board Exams 2018