Home » Entrance Exams » MAT 2018 to be held on 02 & 15 September; After Many Changes AIMA Announced Final Schedule

MAT 2018 to be held on 02 & 15 September; After Many Changes AIMA Announced Final Schedule Recently, All India Management Association (AIMA) has announced many changes regarding the conduction of MAT September 2018 Examination. The frequent changes confused the candidates about the last date of application and exam timeline. With the final schedule available, students can now check the official website to confirm the exam dates. 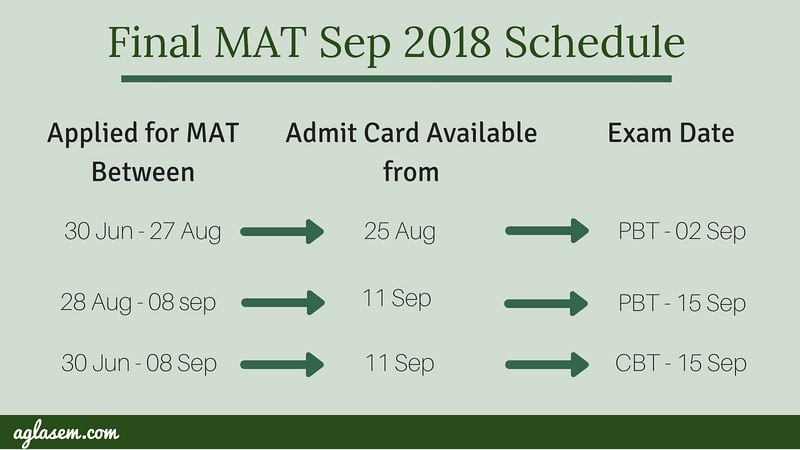 The first change was announced by AIMA was on August 24, 2018, when it extended the registration dates to August 27. Though for the PBT the admit was released on August 25 as scheduled. The next change was announced in the morning of August 28, when the registration was extended until September 08 for PBT and the exam was scheduled to take place in both modes on September 15 only. So, it was unexpected that both modes taking place on one day.

On the same day, by the evening, the AIMA change the schedule again, which announced to conduct the paper-based test in two phases. So, these were the changes announced by the exam conducting body. If in case, you still have any confusion regarding the exam date, you can check the image above or ask in comments below.

Will there be any further changes in MAT Sep?

For now, we cannot say anything, but we see last year trends, the exam conducting body made such kind of changes in the previous session also. In which the PBT took place in two phases and CBT in one day only. There was no change in the computer-based test date form starting. So in this session, if there will be any changes, the same will be reflected on the official website or you can keep checking mba.aglasem.com for the latest updates.

The MAT September 2018 is the first session for admission in the academic year 2019-21 in the MBA programme. Candidates who do not want to register for this session or want to appear again can wait for MAT December 2018, MAT February 2019, and MAT May 2019. In case, a candidate for more than one session, then he/she can use the best scores to apply for any MAT associated colleges.

The MAT scores are applicable in more than 600 colleges. Though students can apply in the maximum of 7 Mangement Institutes through AIMA MAT. For the institutes selected, the exam conducting body will automatically send the scores to the selected colleges. Though candidates must keep the track of the opted colleges application form, GDPI dates by visiting the official websites frequently.

In the MAT exam, there are five sections comprise of Data Analysis & Sufficiency, Language Comprehension, Intelligence & Critical Reasoning, Mathematical Skills, and Indian & Global Environment. Each section has 40 questions making a total of 200 questions. In the exam, there is a negative marking of 0.25 mark and 1 mark awarded for each correct answer.

SNAP 2018 Exam to be held on December 16; Change in SNAP Exam Pattern