The last medical entrance exam of the year, JIPMER MBBS 2017, got over on June 4. Two separate shifts took place for a reported number of 1,89,662 students. These medical aspirants are competing to get one out of 200 MBBS seats at prestigious Jawaharlal Institute of Postgraduate Medical Education and Research.

Students who appeared for entrance exam today have said that they found it more difficult that NEET. Some have commented that it was nevertheless easier than AIIMS entrance exam.

Going into details, here is an analysis of JIPMER MBBS Entrance Exam that was held on June 4, 2017.

Chemistry was theoretical. If you knew facts and could apply logic to questions asked, you could answer them.

More than 80% questions in Biology were from NCERT. Zoology questions were more in number than botany at first glance.

Physics was of moderate difficulty and what was most difficult in it was that it was lengthy.

Surprisingly, English and Logical Reasoning were subjects of concern for test takers. What really threw them off was that several questions in logical reasoning were what should have been in english, like antonyms and synonyms. One student went so far as to say that “English might be deciding factor”, although subject experts wouldn’t agree to that. 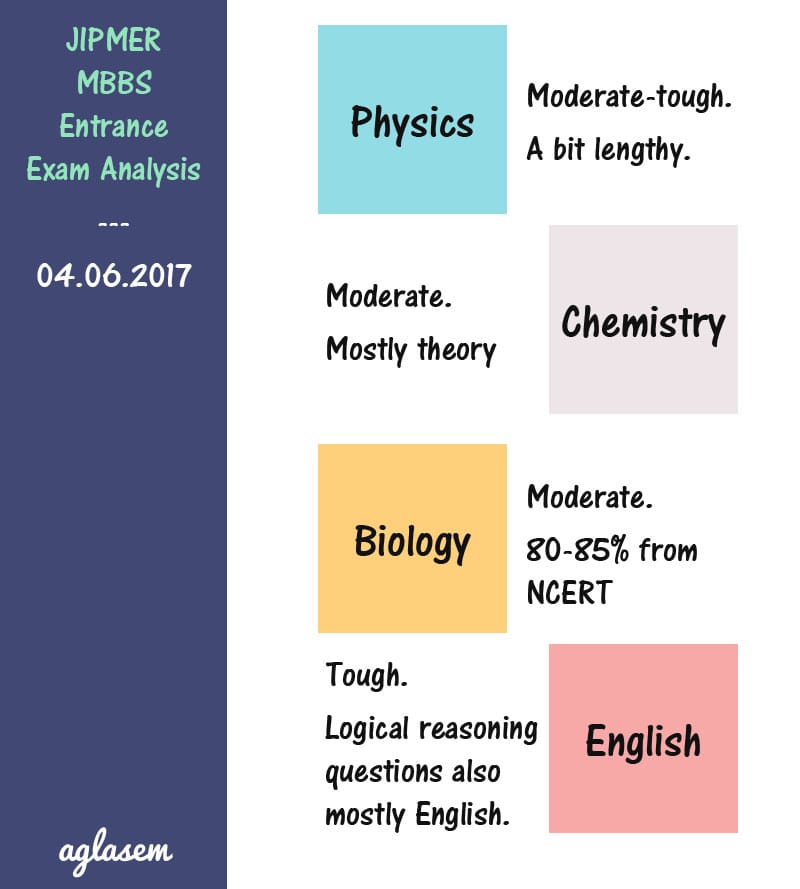 MBBS seats in JIPMER Puducherry are 150, and at Karaikal campus there are 50. JIPMER MBBS 2017 Result will be declared on or before June 19.

An attendance of 80% was reported at centers where JIPMER Puducherry held MBBS Entrance Exam 2017. Many students who had opted for centers away from hometown had taken to travel days before exam. Sweltering heat has been braved by medical aspirants and family members or friends accompanying them.

In an interview before the exam, honorable Director of JIPMER had hinted that English and reasoning would be important. He had said that these two sections play an important role in ranking variation. It is important to realize that even if you score well in physics, chemistry, biology, a poor score in English would bring down ranking.

With entrance exams over, question remains – what will happen to reported AIIMS and NEET paper leak? Will result be announced in June?