There is never a shortfall of the achievers who amaze us every time. Same is the case with Anu Kumari, mother of four-year-old. She has achieved the 2nd general rank in the coveted Civil Services examination. Apart from that, Anu has topped the prestigious exam among all the female candidates. It is her second attempt in which she has passed with passing colors. In her last attempt in 2016, she missed her chance by only one marks with only two months of preparation.

Living in Haryana, Anu Kumari has come from a very humble background. She has done her graduation in Physics from Hindu College, Delhi University. She just didn’t stop there, after the graduation she did her MBA from IMT Nagpur. 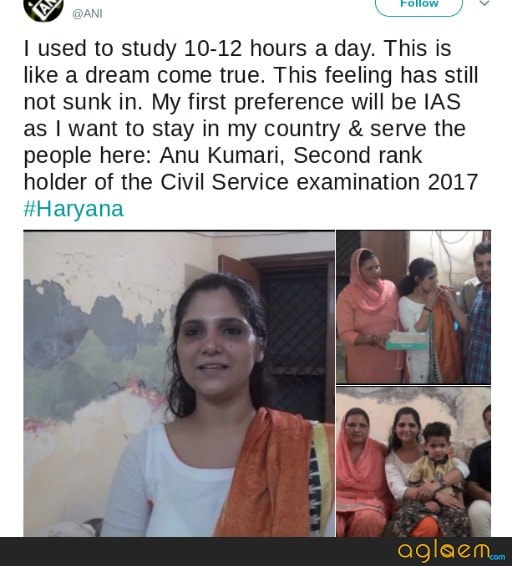 About her success mantra, she used to study atleast 10-12 hours daily in addition to her household responsibilities. In her statement, she also said that there were no newspapers in her village. She relied on the online content only for her preparation and no coaching classes. For her, “Strong will is necessary to achieve something in life and if you are able to do that, nothing can stop you from being successful.”

It is a proud moment for everyone, even the Haryana Chief Minister Manohar Lal Khattar felicitated Anu Kumari with a tweet.

About her future, she said that after becoming an IAS officer, the safety of women will be her top priority. Moreover, Haryana Urban Local Bodies Minister Kavita Jain said Anu will be the brand ambassador of “Beti Bachao Beti Padhao” campaign in Sonipat district. The minister in her statement also said that Anu will be an inspiration for those who don’t understand the value of girl child and kill them in their womb.

The UPSC result was released on April 27, Friday. In which eight women have made it to the UPSC top 25 lists. Overall, Over 9.5 lakh candidates applied for the UPSC preliminary examination in 2017.Out of which only 4,56,625 candidates took the examination. After the exam, only one-fourth of the candidates qualified the test. In exact numbers, 13,366 candidates and 2,568 candidates made it for the Personality Test conducted in February-April 2018.