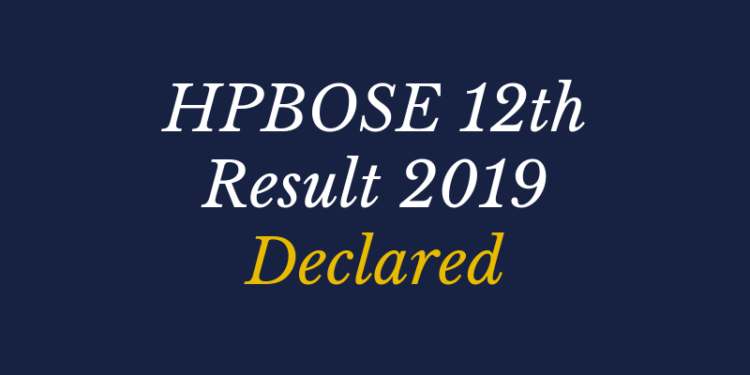 The Himachal Pradesh School of Board Education has announced the HPBOSE 12th Result 2019 today i.e. on April 22, 2019, at 11:00 am. The candidates who had appeared for the exams from March 6 to 29, 2019 can now check their results. The result is available online at hpbose.org. Last year, the result of senior secondary candidates was declared on April 24, 2019.

The pass percentage is 62.01%. Preity Birsanta has topped the district by obtaining 98.8% in Commerce Stream. Ashmita Sharma has topped Arts stream by gaining 96.4% Anil Kumar is the topper of Science stream with 98.6%. This year also, girls outperformed boys.

The candidates of HP Board class 12 can visit the official website first. The link of the result is available here. Click on the link and then the students will be redirected to a new page. On that page, they can enter the roll number and then click on the “Submit” button.

Initially, the result was expected to be released on April 20, 2019. However, there was no such information about the result declaration.

The exams of class 12 were started on March 06, 2019. The first exam was for English. After around 26 days, the exams got finished. The last date for the exams was March 29, 2019, while the last exam was for Financial Literacy.

Those candidates who could not make to get passed, the Himachal Pradesh board will provide them the second chance to do so. Those students will be able to appear for the compartmental exams. The supplementary exams are expected to be held in the month of June 2019. Their results will be announced in the month of July 2019.

In the previous year, around 1,17,542 students took part in the examinations which were 15,000 less than the 2017 session. The result was quite well last year. The overall pass percentage of 2018 session was 77.55%. As usual, the girls won the battle by gaining a higher pass percentage. Girls obtained 3% more pass percentage. Out of the total students, 73% of the boys passed the exams while the percentage of the girls was 76%.

The board which is responsible to conduct various examinations in the state is Himachal Pradesh Board of School Education. The board is well known as HPBOSE. HPBOSE was developed in the year 1969. The headquarter of the board was in first situated in Shimla. Then in the year 1983, the headquarter shifted to Dharamshala.

First, the board was established with the number of staff of 34 people. Then it increased to 643 and the number is still increasing. HPBOSE conducts examination for various classes and courses such as class 10, class 12, J.B.T and T.T.C. More than 5 lakh students take part in the board exams. Presently more than 8000 schools are affiliated with the Board. HPBOSE has also set up 1846 Examination centres throughout the state.

SSC MTS 2019 Notification Out at ssc.nic.in; Apply Online Until 29 May