Last date to make corrections has not been revealed. 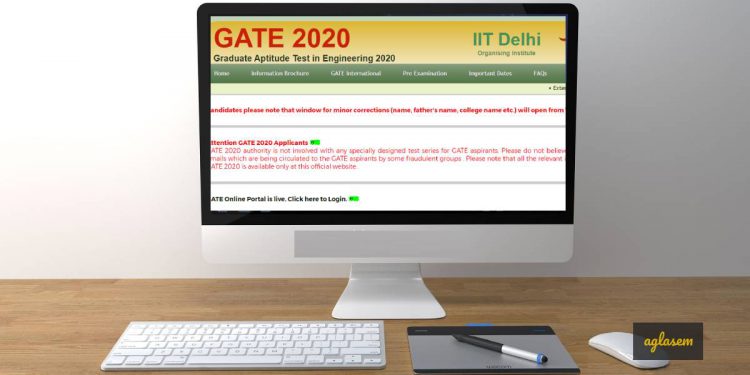 Indian Institute of Technology Delhi (IITD) has announced that they will start Graduate Aptitude Test in Engineering (GATE) 2020 application form corrections from Tuesday, October 15, 2019. Candidates who have registered for the national level exam, and have made errors in certain fields, will be able to login and change them.

The organizing body for GATE 2020 has published this message at gate.iitd.ac.in, “Candidates please note that window for minor corrections (name, father’s name, college name etc.) will open from 15th October”.

As can be seen, it is confirmed that changes can be made to name, father’s name, college name. However it is not yet clear which other details can be changed. Also whether any additional fee will be required or not has not been confirmed. To edit mistakes in the form, candidates need to visit official website of GATE 2020 or the GATE Online Application Processing System (GOAPS) at appsgate.iitd.ac.in.

When the online application form submission window was open, at that time there was no information about form correction. In fact the information brochure stated that no further changes in application can be made after paying application fee. Although the FAQs section of gate.iitd.ac.in said that correction window details are there on the site.

It is however confirmed that candidates can submit requests for changing exam city, with additional fee, until November 15, 2019. However the application form correction for other details will close sooner.

Candidates may note that they may find incomplete name of college in the downloaded application form, even though they filled complete name and the online form showed correct data. It is clarified that this is not an error, but the name is sometimes shortened in downloaded form due to character limit.

Last time the organizing IIT opened different windows for editing different details in the form. For example there was one window to edit name, date of birth, parents’ name, degree. Last year IIT had also told that which data should be as per which document.

Degree details on the other hand need to be as per degree certificate or final year/ semester mark sheet or certificate with seal and signature of hod/ principal/ competent authority. Last year another window was opened to edit category, gender, PWD status. Then again a last chance was given to email to the IIT for name correction.