CSIR NET June Result 2017 Delayed due to Legal Issue; “Bear with us”, Says the Council For long the candidates are waiting for CSIR NET June Result 2017. The examination was held on June 18, 2017, and the result has not been announced until now. To allay the growing anxiety of the candidates, Council of Scientific and Industrial Research (CSIR) has officially released a statement addressing the delay.

According to the recent notification, the announcement of result is being delayed because of the ongoing legal battle in regard of CSIR NET Dec Result 2016. The result for the Dec 2016 exam was announced on March 29, 2017. After which, a petition was filed with the High Court of Punjab and Haryana regarding the discrepancy in the final answer key.

A Master of Science NET aspirant, in the discipline of Applied Physics, claimed that she had a decline of over 10 marks due to the difference of answer inCSIR NET the in the provisional and final answer key.  According to the petition, the correct answers for question number 44 and 71 in Booklet B, are that published in the provisional answer key and not that in the final one.

If the answer key is incorrect than the fate of numerous candidates has been affected. The case is still in the court and CSIR cannot issue the result for NET June 2017 examination until a decision is taken.

CSIR has assured students that the result will be announced in due course of time but has not given any fixed date or month. Since the wheel is not with conducting body they have requested the candidates to remain calm and bear with the situation. The official notification for the CSIR NET June Result 2017 Delay is as below. 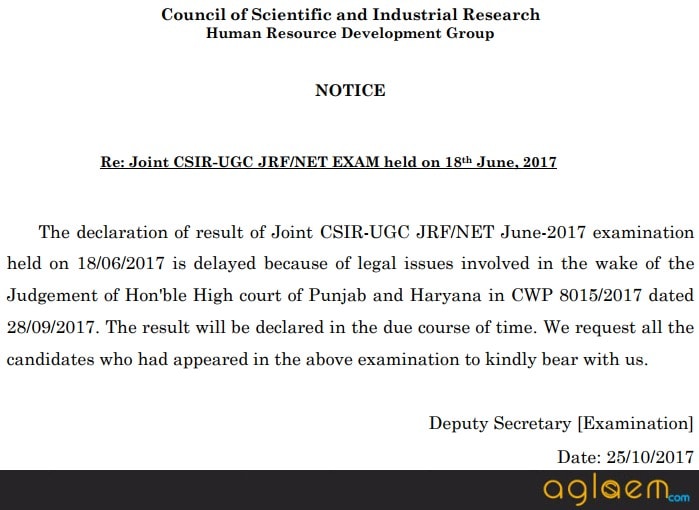 Now the question remains when will be the result of CSIR NET 2017 declared? Predictions are impossible; because it will depend upon the decision taken by the High court of Punjab and Haryana.

After the declaring of the result, the state of marks and the cutoff will also be announced. The marks in the exam can be checked via login. It could be accessed by submitting the Roll Number and the Date of Birth. The cutoff of the examination will be mentioned category-wise for JRF and Assitant Professorship. The candidates may check the cutoff for past two examinations can be checked from below. 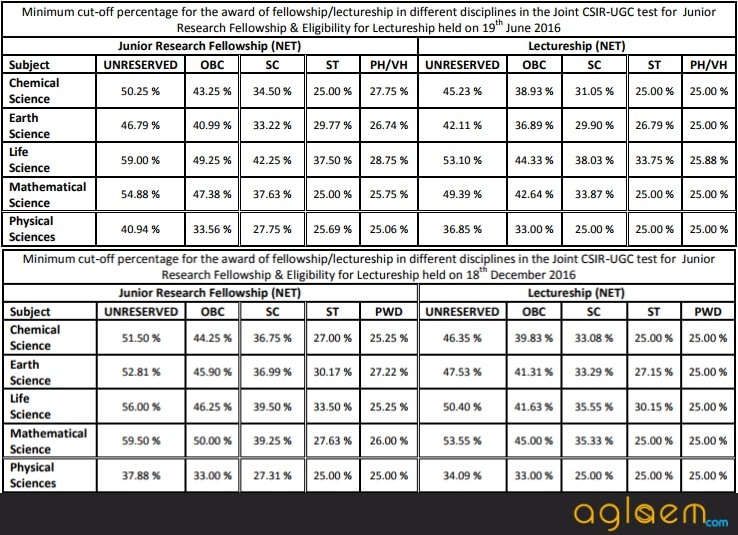 CSIR NET is a national level examination. It is conducted twice a year for awarding JRD and Assistant Professorship to the deserving candidates. The examination is only held for Chemical Science, Physical Sciences, Life Science, Earth Science, and Mathematical Science. The NET for other subjects is conducted by CBSE and is due to be held on November 05, 2017. The details for CSIR NET Dec 2017 have also been announced. It will be held on December 17, 2017.