With CBSE releasing information brochure of JEE Main 2018 yesterday, it is quite clear that admission to the upcoming academic session will be through exam held by CBSE only. Central Board of Secondary Education is going to look after the conduct of exam from application form release to result announcement. In other words, students who are currently in class XII or have dropped a year or two to appear in 6th Joint Entrance Examination (Mains) will not face any changes.

Exam pattern is same as that of last year. One gets the option to choose between online and offline exam modes for paper 1, which is for engineering admission, and there is only offline exam for paper 2 which is for architecture admissions. A student can appear in one or both. A single application form is required, however, one must clearly mention paper or papers appearing for and pay fees in accordance to that. Application form of JEE Main 2018 will be available from December 01, 2017, to January 01, 2018.

JEE Main 2018 paper 1 is both online and offline. Paper 2 is only offline. However when NTA starts holding JEE, it will be only online.

Union Cabinet recently approved the formation of NTA, National Testing Agency, and is also giving it a one-time grant of Rs 25 crores to start operations in the first year. The cabinet had further confirmed that NTA is to hold all higher education exams currently organized by CBSE and AICTE, to start with, only CBSE. This means that next JEE Main, most probably the one for admission to academic session 2019-2020 will be held by NTA.

A number of changes are inevitably in store for future JEE aspirants. The next batch of JEE takers will probably be the first to face a brand new exam process. The exam will be online only, and twice a year. These two points, which have already been confirmed by GoI through a press release, are a bit of a concern. 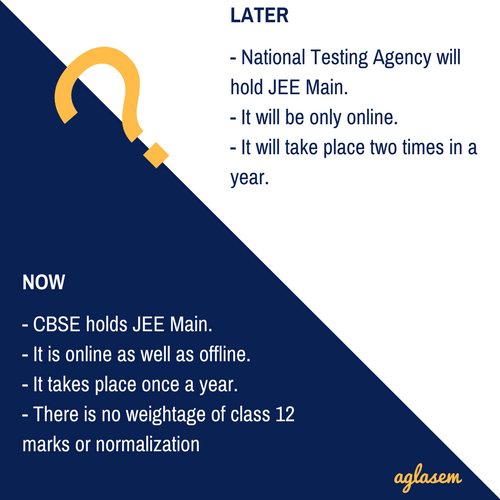 To start with, if JEE goes completely online, then students need to be well prepared for it. Currently, the exam is held online as well as offline. Students get an option to choose among the two based on their preference. Now if exam is only online, they need to start taking mock tests from early on to get familiar with exam process.

National Testing Agency will hold all exams twice a year. This raises questions such as: How many times can a student take the exam? Which score will be finally used for admission? Will better of two socres be used? Will there be normalization of scores of two exams?

Another point of exam taking place twice a year has its pros and cons. On one hand, a candidate now gets to rely on two attempts to score well to get admission. On other hand it may create confusion as to what could be a good score to get admission. Also there will again be concern over normalizing scores of candidates who appear in more than one session. Moreover, there are unanswered questions to this point; like, can a student appear for JEE Main once or twice a year when NTA holds it twice, which score will be accepted, will better of two scores be used or the latter one. As and when NTA comes into being and decides upon these points, they will be clarified. Until then, students can only focus on preparing.

What do you think would change in JEE Main 2019? Will there be a change in exam pattern and syllabus also? Do you think it is a good idea to have only an online exam? Share your views in comments below.