The Central Board of Secondary Education (CBSE) conducts the National Eligibility-cum-Entrance Test (NEET) exam every year for admission of students in MBBS and BDS courses. NEET is the single window for medical admission in the  Medical and Dental Colleges of India. The medical aspirants around the nation are eagerly waiting for the official NEET UG 2018 notification and it is expected to be released by the fourth week of January 2018. The notification will be published online at the exam’s official website, cbseneet.nic.in.

As per news reports and on the basis of past year trends, the notification is to be available by the end of this month. Last year, the notification was released on January 31, and on the same day application form was released. So, it can be expected that even for this year’s exam, the for CBSE NEET UG 2018 application form will be available at a similar time.

Mostly, NEET is held in the 1st Sunday of May. Hence, it is anticipated that the exam date for NEET UG 2018 will be May 06, 2018. The confirmed date will be announced by CBSE through the official notice but an order published by Commission of Entrance Examination (CEE), Kerala, has made clear that the paper will be held between May 01 to 07, 2018. Also, as per the MCI schedule, the result for NEET will be announced on June 01, 2018. 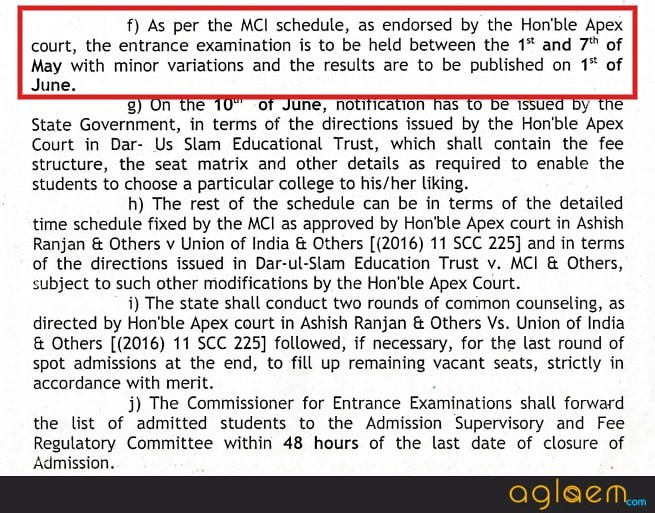 Since it was first introduced, NEET has been shadowed by controversy.

For the first time, NEET was conducted in 2013. Between 2012 and 2013 as many as 115 different petitions challenging the notifications of the MCI and the DCI were filed in various High Courts across the country. The petitioners were mainly filed by the minority medical institutions and private medical colleges highlighting the flaws in the exam process.

On the same year NEET was scrapped and in 2014 and 2015 AIPMT was held. However, in 2016, the revival of NEET was considered by Supreme Court and it was conducted again. In the year 2016, AIPMT and NEET both were conducted and AIPMT was called as NEET 1.

Now, NEET is the only medical entrance exam in the nation…

…but is still surrounded by controversies. Last year, the students and parents were furious after it came to light that CBSE distributed different questions paper in few languages. Ultimately, it was the medical students who suffered.

Now, CBSE is taking all the measures to conduct the exam successfully. To appear for NEET 2018 the students should have passed Class 12th or its equivalent exam in Physics, Chemistry, Biology/ Biotechnology or any other elective subject with English from State Board or from a recognized university. The candidate should have obtained minimum 50 percent marks in PCB group for general candidates and 45 percent (for general PH) and 40 percent (for SC/ST/OBC categories). The upper age limit for the examination is 25 years.

As of now, no major change in the exam pattern has been announced. This can be confirmed only after the official notification is released. So, it is expected that the exam will consist of 180 objective type questions from Physics, Chemistry, and Biology (Botany and Zoology). The duration of the test would be of three hours. The exam shall be conducted in Hindi, English, Urdu, Gujarati, Marathi, Oriya, Bengali, Assamese, Telugu, Tamil and Kannada.

From last year onwards, the Aadhaar Card has been made mandatory to apply for NEET 2018 examination. Students who do not possess it are suggested to apply for it at the earliest to avoid any last minute issues. Only online application forms would be accepted. All students are advised to note that there is application will not be available or accepted by any other mode other than online.

The role of CBSE is only limited to conducting the exam, declaring the NEET 2018 Result and handing over the All India Rank to the Directorate General Health Services, Government of India. The counseling is conducted for 15% All India Quota Seats. Also, the AIR is supplied to state/other Counselling Authorities.