Home » CAT 2019 Registration deadline extended by 7 days! No chance to apply after that, Image re-upload dates also out

CAT 2019 Registration deadline extended by 7 days! No chance to apply after that, Image re-upload dates also out

This is the last chance to apply for the Common Admission Test (CAT) 2019. 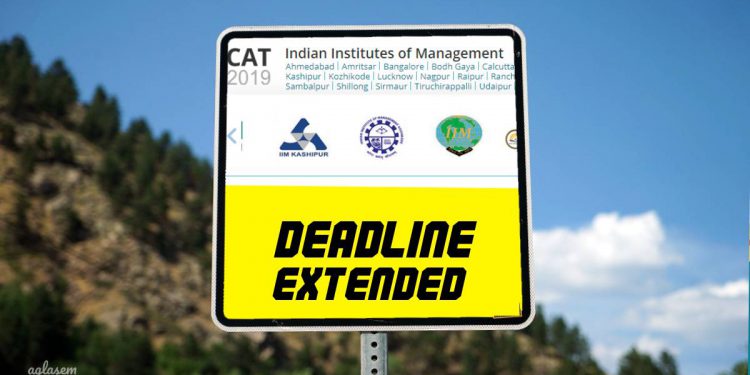 Indian Institute of Management Kozhikode (IIMK) has extended the last date to apply online for Common Admission Test (CAT) 2019 by a week. Now the registration deadline is September 25, 2019 (5 pm). Initially, it was supposed to be tomorrow that is September 18, 2019. The new last date has been notified at iimcat.ac.in.

Last year also the exact same thing happened. That is, the registration deadline was extended by a week. However after this, candidates must not expect any more extensions as it has been confirmed that form correction window for images will be opened on September 26, 2019. The facility will remain available until September 29, 2019.

Change in last date to register for CAT 2019 does not alter any other dates; admit card will still be released on pre-announced date of October 23, 2019, and the exam will be held on November 24, 2019.

Last year IIM Calcutta, the then organizing body of the Common Admission Test, received highest applications for CAT since the year 2009. The number of applicants stood at 2,41,000 and 2,09,405 appeared in the exam. The applications received figure was 4.4% higher than the previous year when around 2,31,000 had applied and 1,99,632 had reportedly appeared for the MBA entrance exam.

Besides getting to re-upload images if they were blurry, there is no provision to edit other details in the application form. Even this facility was provided for the first time in the previous year; prior to that, even this option was not given. It has been reported that this issue sometimes forces applicants to re-apply with another email ID, ultimately increasing the application count. However 87% candidates did appear in the exam last time which is at par with the attendance level of most national level entrance exams.

CAT 2019 is the gateway for MBA admission to all the IIMs and also several other B Schools in the country. Some of the top names herein are FMS Delhi, MDI Gurgaon, FMS IIT Delhi, SJMSOM IIT Bombay, SPJIMR Mumbai, VGSOM IIT Kharagpur, DMS IIT Madras.

The registration for IIM CAT 2019 started on August 7, 2019. This year’s organizing body, since the IIMs conduct it in a rotation order, will conduct the exam in 156 cities. The exam fee is Rs 950 for SC, ST, PWD, and Rs 1900 for all others. As there will be no more registration deadline extensions, apply now at iimcat.ac.in.