In most parts of India, the CAT exam ran effortlessly and candidates had no complaints largely (well not management wise at least). However, candidates who appeared at a test centre in Kalkaji in Delhi were not as fortunate.

In an appalling incident, around 200 candidates appearing for CAT 2017 at “On line Edu Solutions”, Kalkaji, Delhi were unable to take the test in their designated slot due to server issues. While the exam was supposed to start at 9 AM in the morning (First Slot), the exam probably started in the afternoon after the candidates were moved to another centre at Noida and Greater Noida.

The candidates complained that they were clueless the whole time as no formal communication was passed to them. They were further restricted from going out to eat. At around 2 pm in the afternoon, six coaches were reportedly arranged for the candidates to be moved to another test centre.

Only 60 students out of 250 were able to appear for the exam at the scheduled time. CAT 2017 is a Computer Based Test (CBT) held for admission into various master’s programmes in IIMs across India. As per exam analysis of CAT 2017, paper was overall moderately tough, with a really tough DILR section in both shifts. The exam tests the candidate on the bases of three sections namely Verbal Ability and Reading Comprehension (34), Quantitative Ability (34), Data Interpretation and Logical Reasoning (32). 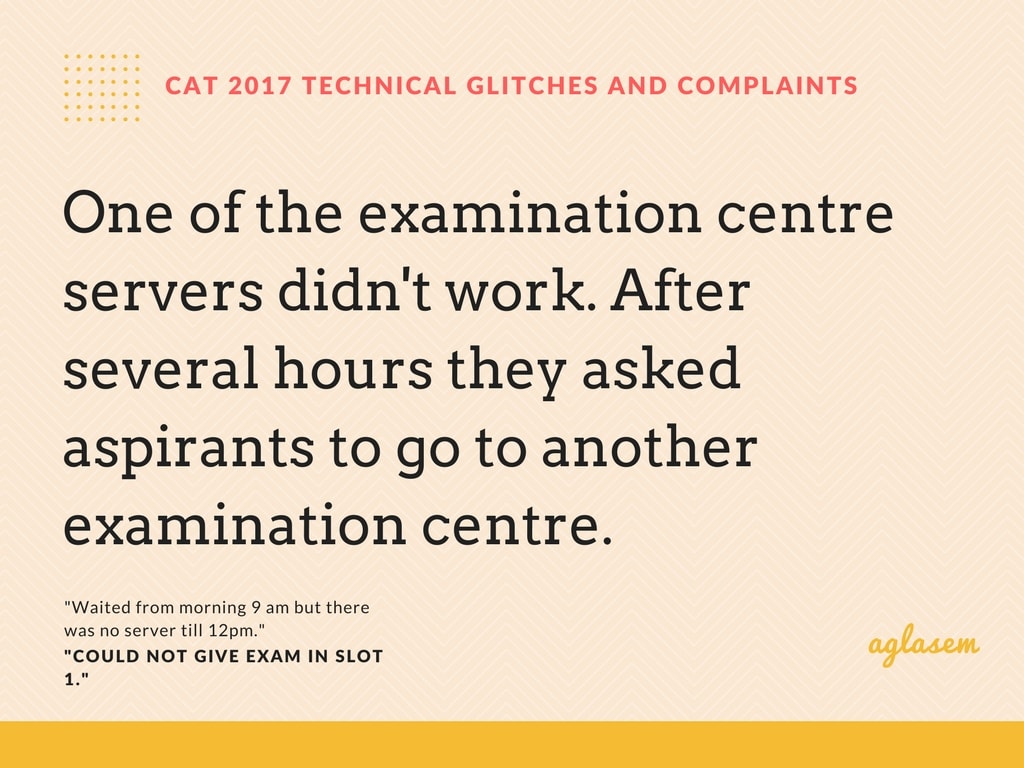 The test is conducted annually by one of the IIMs based on a policy of rotation. This year the test was conducted by IIM Lucknow. The CAT exam results are expected to be will released by the second week of January, 2018.

The TIME coaching institute reportedly stated that the pattern of the morning slot of CAT 2017 was very much within the footprints of CAT 2016 exam. The number of questions across all three sections remained the same as that of the previous year. CAT 2017 for both the slots were student friendly and, Slot 2 offered a comparatively easier DI LR section unlike in slot 1.

The test began with the Verbal Section, which had 34 questions – 24 from Reading comprehension and 10 from verbal ability. The second section was the (Data Interpretation and Logical Reasoning) DI-LR with 32 questions dispersed equally between the two areas. The third section was the Quantitative Ability section which also had 34 questions. Each section was timed for 60 minutes. The marking structure was similar to the previous years with 3 marks for every correct answer and a negative 1 for the negative ones. There was no negative marking for TITA questions. (TITA is an acronym for ‘Type in The Answer’).

The way ahead for CAT Exam should be to implement strict measures against such test centres. Such blunders should never be entertained as it affects the future of the candidates who worked hard for the exam.

What do you guys think should be done in order to ignore such instances in future? Do you think the IIM Lucknow management must be blamed for such carelessness? Do let us know your opinion below in the comments section because we strongly feel that such mis-happenings should neither be ignored nor be left alone.

CISCE Adopts Lower Passing Marks For ICSE and ISC From 2019