Common Admission Test (CAT) is one of the most popular management admission tests. 20 IIMs and more 100 B-Schools accept the score of the examination. The upcoming CAT 2017 is being conducted by the Indian Institute of Management (IIM) Lucknow on November 26, 2017. The candidates, who applied for the test before September 25, will be able to download the admit card today.

As per the initial official notification, the CAT admit card was to be issued on October 18, 2017. However, probably due to the festive season the issuance was delayed until October 25, 2017. To be precise, IIM will be releasing the admit card at 01:00 pm. The issuance time has been announced on the official website. 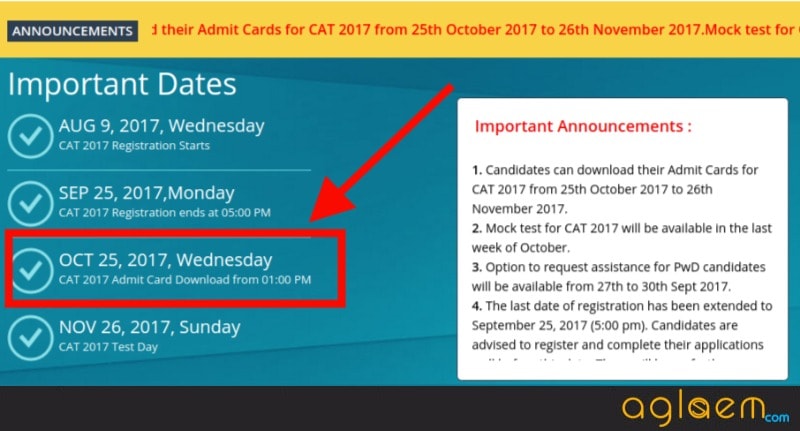 The login for CAT works perfectly but at times candidates might find it difficult to download the admit card. In that case, it is advised that the candidates try downloading it after some time. However, if the admit card is not available in the login then the candidates can contact the authority at toll-free number 1800-266-0207 or email address [email protected]

CAT will be held in two sessions. The session allocated to the candidates will be mentioned on the admit card. Candidates who will get early morning session are to report at the exam center by 7:30 am. Whereas, the reporting time for the second session is 01:00 pm. It should be noted that after 8:45 am and 2:15 pm, the entry will close.

Last time, rough sheet and pen were provided at the exam hall. So, most probably same will happen this year as well. The instruction regarding the same will be mentioned on the hall ticket. The general instructions on the admit card are very important and should not be ignored. All the do’s and don’t will be clarified through it.

A Test System Number will also be mentioned on the admit card of CAT. It is an important number and candidates will need it at the exam hall to identify their floor and computer. Other details mentioned on the admit card will be the name of candidates, registration number, time of the exam, the address of exam center, etc. Space will be provided for photograph and signature.