The Institute of Chartered Accountants of India (ICAI) announced the CA Final Nov 2017 Result. The exam for CA Final was held in November 2017 and its result was announced yesterday, January 17, 2018, at around 05:00 PM. The candidates could check the result by entering the Roll Number, Registration Id or PIN. Along with the result, ICAI also published the merit list for those who secured above 55%, and upto 50th rank.

Mohit Gupta from Karnal has topped the CA Final exam. He scored 587 marks out of 800 and managed to secure a percentage of 73.38. Also, two students from the Delhi, Prashant and Aditya Mittal, bagged the second and third position. Prashant got 517 scores, leading to the percentage of 71.38% and not far in the race is Aditya with 565 scores and 70.62%. 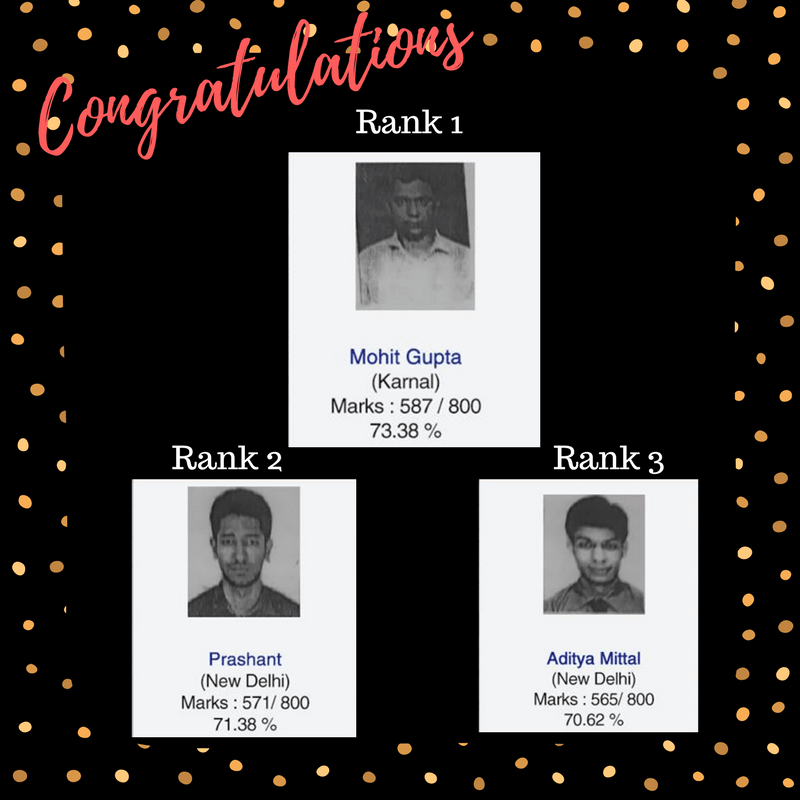 CA. Nilesh S. Vikamsey, President of ICAI, congratulated the rank holders for their hard work and results. Also, he conveyed a message to those who could not qualify despite their hard work, to not to lose hope and keep working hard, plan and study efficiently. They will eventually achieve success.

Those who could not qualify the CA Final need not be disheartened. They can prepare for CA Final May 2018 exam. The exam will be conducted for both the existing scheme and the revised scheme. The Final examination under the existing scheme for Group 1 will commence from May 02, 04, 06 and 08, 2018, while for Group 2, it will be held from, May 10, 12, 14, 16, 2018. The exam date for Final Examination under New Scheme is same as the Existing Scheme. The applications will be available from February 05, 2018.

The only difference in the existing scheme and new scheme are the subjects for Paper 5 and 6 in Group II. In both the schemes, the exam pattern for Group 1 is same. However, in Group II, under the existing scheme, the Paper 5 is for Advanced Management Accounting and Paper 6 is for Information Systems Control and Audit. In new scheme. Paper 5 is Strategic Cost Management and Paper 6 is Elective Paper. Other than this, the rest of the pattern is same.