Candidates will be able to check their result by name, roll number. 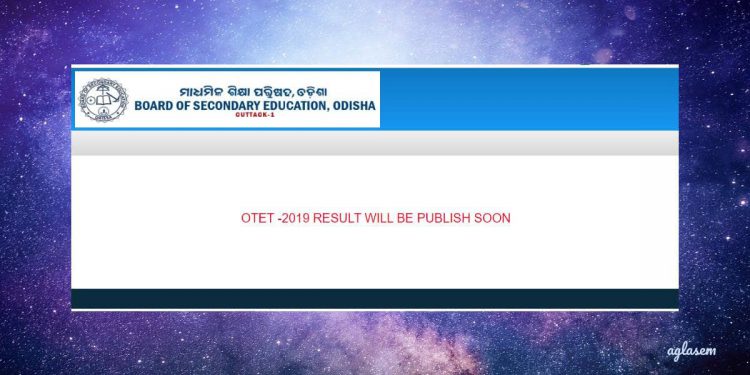 The Board of Secondary Education Odisha will announce OTET result 2019 today. As per reports, it will be announced either by evening or latest by tonight. It is speculated that the results can be checked by roll number as well as name.

State level teacher eligibility test OTET was held from August 6 to 18, 2019, and August 22, 2019. A re-exam was held on September 22, 2019 for candidates of flood affected areas. The official answer key of the exam was published on October 5, 2019. Candidates could submit their grievances against the answer key until October 10, 2019. Now more than a month after the event, OTET results are being announced.

A link with the text “OTET Result 2019” is appearing on the website bseodisha.nic.in. On clicking it, a new page is opening with the url bseodisha.nic.in/?q=node/384, which is getting redirected to 202.191.140.165/otetmay19/reg_start.php. Instead of displaying results, the page is displaying the message “OTET 2019 result will be publish soon” (sic).

The link appeared today, and since then, the website bseodisha.nic.in has been loading very slowly. Sometimes, it is not opening. However on fast internet, it is opening, albeit showing a distorted page at times. It is probably being caused by heavy load on served caused by all the candidates trying to check results at once.

There is another website of BSE Odisha, bseodisha.ac.in. However there is no mention of the OTET 2019 result there.

This Odisha Teacher Eligibility Test 2019 was conducted without any glitches and without any negative happenings. As may be recalled, the OTET 2018 which was scheduled for January 16 had to be cancelled due to a paper leak. Candidates had applied in large numbers for the 2018 TET as well, and they were given a chance to reapply for the 2019 TET without paying any fees.

Now, as per result of OTET 2019, candidates will be declared as qualified or not qualified to become teachers. It may be noted that getting requisite percentage in the teacher eligibility test will be required in order to qualify, and then get TET certificate. Those with TET certificates will then be eligible to apply for teaching jobs in Odisha.

Per the NCTE norms in India, it is mandatory to qualify Teacher Eligibility Tests in order to become teachers. Besides the national level CTET, which is scheduled for December 8, 2019, each state holds individual TETs as well, which for Odisha is the OTET exam.

Regarding OTET results, Samir Ranjan Dash, School and Mass Education Minister, announced on October 21 or 22 that the result would be declared by November 21, 2019. He had further said, as per reports, that few errors were identified in the exam on the basis of challenges submitted by candidates against the answer keys, and that final evaluation of marks are being done as per revised answer keys. Moreover, candidates whose grievances were genuine, will be returned the fee amount. The board had charged Rs 500 per question against which grievances were submitted. Leading dailies of the state had also reported that candidates were unhappy with the fee amount.